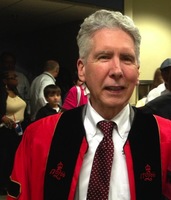 Patrick B. Forsyth conducts research on school trust, academic performance and affective, structural dimensions of schools, and school policy.  Forsyth has long been involved nationally in the reform of educational leadership preparation, starting in 1984 when he became executive director of The University Council for Educational Administration (UCEA) and his management of The National Commission on Excellence in Educational Administration.  As Corporate Secretary of the National Policy Board for Educational Administration, Forsyth obtained the Pugh grants that funded the ISLLC project and united the professional associations and 50 states around licensure standards for school leaders.  Internationally, Forsyth has worked with education colleagues in China, New Zealand, Taiwan, The UK, The Netherlands, Hong Kong, Australia, Canada, and The United Arab Emirates.  His books include Collective Trust: Why Schools Can’t Improve Without It (Teachers College Press), Trust and School Life (Springer), Educational Administration: A Decade of Reform (Corwin); City Schools: Leading the Way(Corwin), and Effective Supervision: Theory Into Practice, (Random House).  In addition to nine books, he has published scores of book chapters, refereed articles and papers.  He is founding editor of the Journal of Research on Organization in Education.  He has served as Vice President, Member of Council, and The Executive Board of The American Education Research Association.  Returning to the professoriate in 2000, he has directed an extensive research project focused primarily on the importance of trust in schools, teachers and school leaders and the implications of Self Determination Theory for school effectiveness. He co-directs the Oklahoma Center for Education Policy and teaches doctoral courses in research, policy, and organizational theory, chairs and serves on Ed.D. and Ph.D. committees in educational leadership.